Since Satoshi Nakamoto dropped the Bitcoin whitepaper in 2008, the differences between gold and its scarce digital relative have been a topic of hot debate.

With the yellow precious metal now hitting all-time highs, we decided to look into 5 ways to compare Bitcoin with its likewise limited in supply physical counterpart.

Gold is one of 118 elements on the periodic table. In its pure form, it is a bright, slightly reddish yellow, dense, soft, malleable, and ductile metal. Physical gold can be verified with scales and a specialized handheld scanner (as a deterrent against fake tungsten filled bars).

Bitcoin on the other hand is purely digital as an asset. BTC can be transferred across its immutable blockchain, with the authority to do so residing from user-generated private keys that can be stored on a variety of digital wallet types. BTC transactions or ownership can be verified by downloading a full copy of the Bitcoin blockchain and running a Bitcoin node.

Whereas gold has a reported above ground stock of 197,476 tonnes—with 54,000 tonnes estimated to be still beneath the earth’s crust—BTC’s circulating supply is currently 18.45 million, with 2.55 million BTC still to enter into circulation.

The total supply and all Bitcoin transactions can be tracked and independently verified in real time on the world’s first and most secure public blockchain.

In terms of traits as money, gold matches Bitcoin in the categories of fungibility and costliness to forge.

However, for qualities like portability, transactability and ability to be used on a digital network (like the internet)—BTC literally created a category it defined: self-custodial blockchain-based assets—or cryptocurrencies.

A key upside of gold being a physical element is that it is intrinsically simple as an asset class – you can touch and hold gold. In contrast, digitally-native BTC is ethereal and its ownership can be passed between digital devices, papers, and brains. However, this also means Bitcoin can be secured in customizable and inexpensive ways, like multi-sig wallets, and transacted over different settlement networks like Lighting.

When delivery of physical gold is required, transportation is often costly, slow and susceptible to detection and confiscation. For Bitcoin, settlement over any distance can be done cheaply in comparison to physical assets, almost instantly and from any two internet connected locations across the globe and beyond.

Given the respective prices of both Bitcoin and gold, the total market cap of circulating supply for each asset comes in at $207 billion for Bitcoin and $12.7 trillion for gold.

That makes Bitcoin over 60 times smaller than gold—or 1.62% of gold’s current market cap.

Given both gold and BTC’s respective year-to-date appreciation of 30% and 55%, each asset has increased its market cap respectively by $2.9 trillion and $73 billion since Jan 1st, 2020.

That works out to around 40 times more value flowing into gold than Bitcoin in 2020, although Bitcoin’s price rose nearly double in percentage terms.

Bitcoin trading volumes have been steadily growing since trading first went live over a decade ago on Mt. Gox. At present—across trusted spot exchanges—around $2 billion a day or $60 billion a month worth of Bitcoin is traded against the dollar.

Based on a recent Cryptowatch report, Bitcoin trading volumes at trusted spot exchanges have increased nearly 50x from 2016 in comparison to around a 15x increase in the price of each BTC since then.

As for gold, according to Nasdaq’s spot gold LBMA data, around 830 million Toz (troy ounces are a traditional unit of gold weight) was traded in June this year. In dollar terms that volume is worth around $1.65 trillion a month at current gold prices. 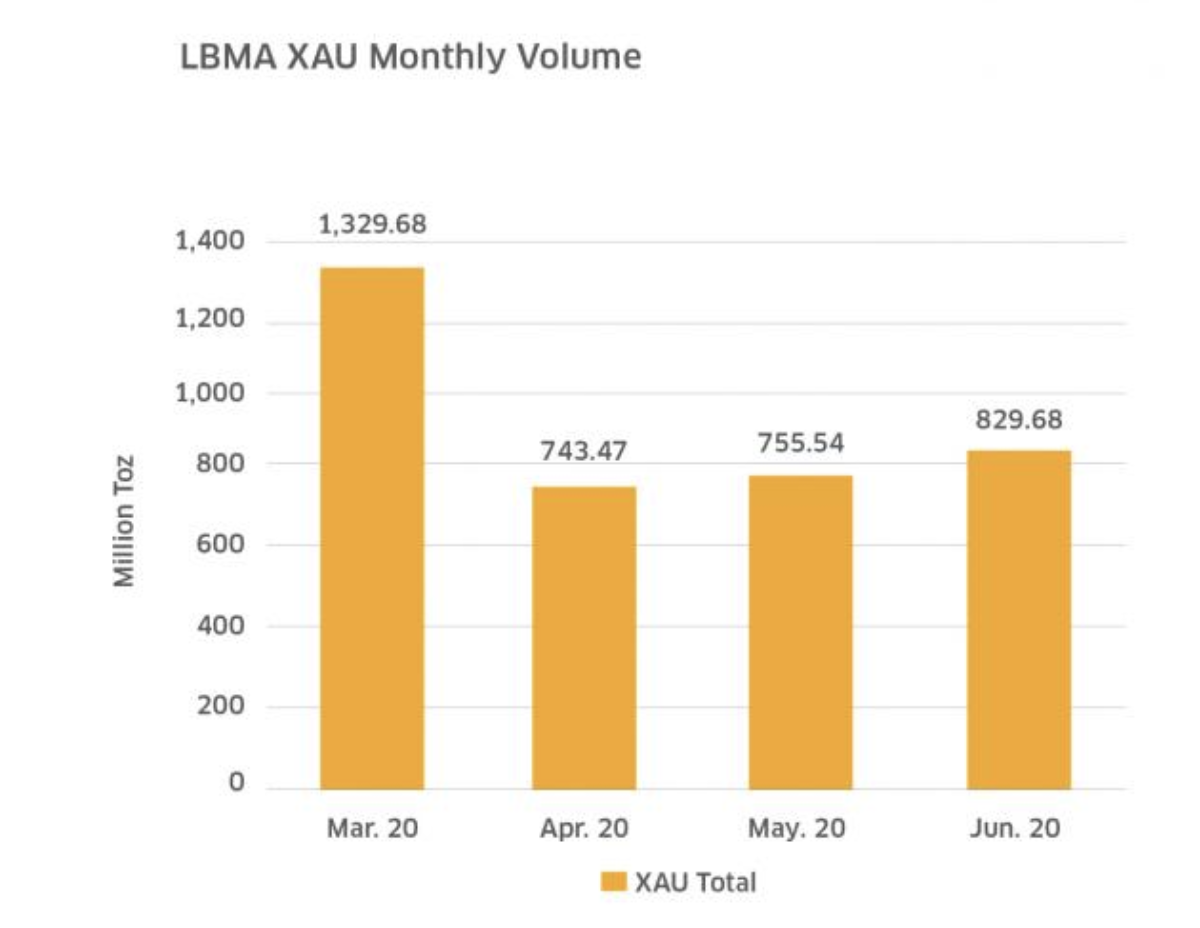 Comparing trusted BTCUSD spot market volume to gold’s LBMA—spot trading Bitcoin volumes are around 18 times smaller than gold. Interestingly, around 13% of gold’s market cap is traded each month in comparison to 29% for Bitcoin.

Outside the exchanges, Bitcoin’s on-chain transactions volume (or lack thereof) can also be measured in what is known as a HODL-wave (BTC unmoved on the blockchain over the last 365 days).

Based on blockchain activity, Bitcoin’s 1-year HODL wave is currently up to an all-time high of 63%. The current level is eclipsing the old 61% high from early 2017—a year BTC saw a near 20-fold price increase.

It is reported that between 2,500 and 3,000 tonnes of gold is mined each year and brought into open circulation. Based on 2016 data, the country that mines the most is China, at 14% of annual production, with around 16% coming from North America and 19% from Africa.

Total mining supply is reported by entities like the World Gold Council or the US geological survey each year. At the moment at least, these surveys don’t count off planet reserves (worth an estimated $700 quintillion). Just to demonstrate the scale of that number, if they managed to get that asteroid to our planet and divided it all out equally — everyone on earth would have an extra $93 billion worth of precious metals.

Bitcoin on the other hand has had a strict supply schedule hard coded into its consensus rules since day one. Those rules recently led to its annual supply inflation dropping from 3.6% to 1.8% a year following its third halvening epoch that ended in May this year. Every day, a fairly predictable amount of bitcoin is emitted into the economy, unlike physical commodities like gold, which vary more widely in production.

One area that gold can clearly trump Bitcoin is in its history as a scarce asset. Gold is well known for having a 5000 year history as a store of value and medium of exchange. For centuries it has been hoarded by kings, private individuals, nation states and central banks.

Alternatively, a recent Fidelity report quoted Nate Geraci (President of Investment Advisor, ETF Store) saying, “anecdotally, about 90% of their millennial clients said they prefer bitcoin to gold.” As we move into a new digital age, can the shiny yellow metal continue to retain its edge?

In contrast, Bitcoin has only 11 years and 7 months record as an operational public ledger. However, since going live on January 3rd 2009, the Bitcoin network has maintained an uptime of 99.99% with currently around $45 billion in on-chain transaction activity each month.

Over that time, the Bitcoin network has also amassed over 10,000 nodes which enforce its rules and scarcity, as well as a soaring mining hash rate (currently at a network all-time high above 120 EH/s), consuming ~$0.5 million/hour worth of electricity in search of new coinbase rewards.

Gold as a Narrative for Bitcoin

Part of Bitcoin’s core narrative has always included its role as a censorship resistant and digital alternative to gold. Other more recent narratives for Bitcoin include being a reserve currency for crypto—think liquidity for much smaller cap ETH, USDT, etc—and as a negatively correlated asset to more traditional financial investments.

Apart from just its price history and at least on-planet scarcity, gold’s future narrative may include being a reserve asset for state-backed currencies—like it was pre-1971.

There is no guarantee that this will happen—but central banks must be holding all that gold for some reason, right?

With the future looking far stranger than the past, there are only a few things we can be reasonably sure of: this won’t be the last time we break a US national debt record, Bitcoin does not look like it’s about to die anytime soon, and lastly, the fiat money printer always seems to go Brrr—whatever may be happening in the economy.

What are the long term implications for scarce assets like gold and Bitcoin?—we can’t predict the future, but we will be monitoring it closely on Cryptowatch.

Thanks for reading our market analysis – make sure to follow us for the latest charts and insights @Cryptowat_ch on Twitter.