Cryptowatch has added support for the much-hyped Bitcoin stock-to-flow (S2F) valuation indicator. The model that boasts a 95% correlation to historical Bitcoin price data was popularized by Bitcoin quant analyst Plan B.

The scarcity-based model can now be used as a chart overlay on any Bitcoin / USD chart on Cryptowatch. The new trend analysis indicator can be customized for inputs such as the number of coins lost on the network and confidence bounds.

Plan B’s model is forecasting that Bitcoin hits a valuation of $55,000 per coin one or two years after next month’s halvening. Find out how the model is calculated, how to enable it on the Cryptowatch trading terminal, and the full future price forecast below. 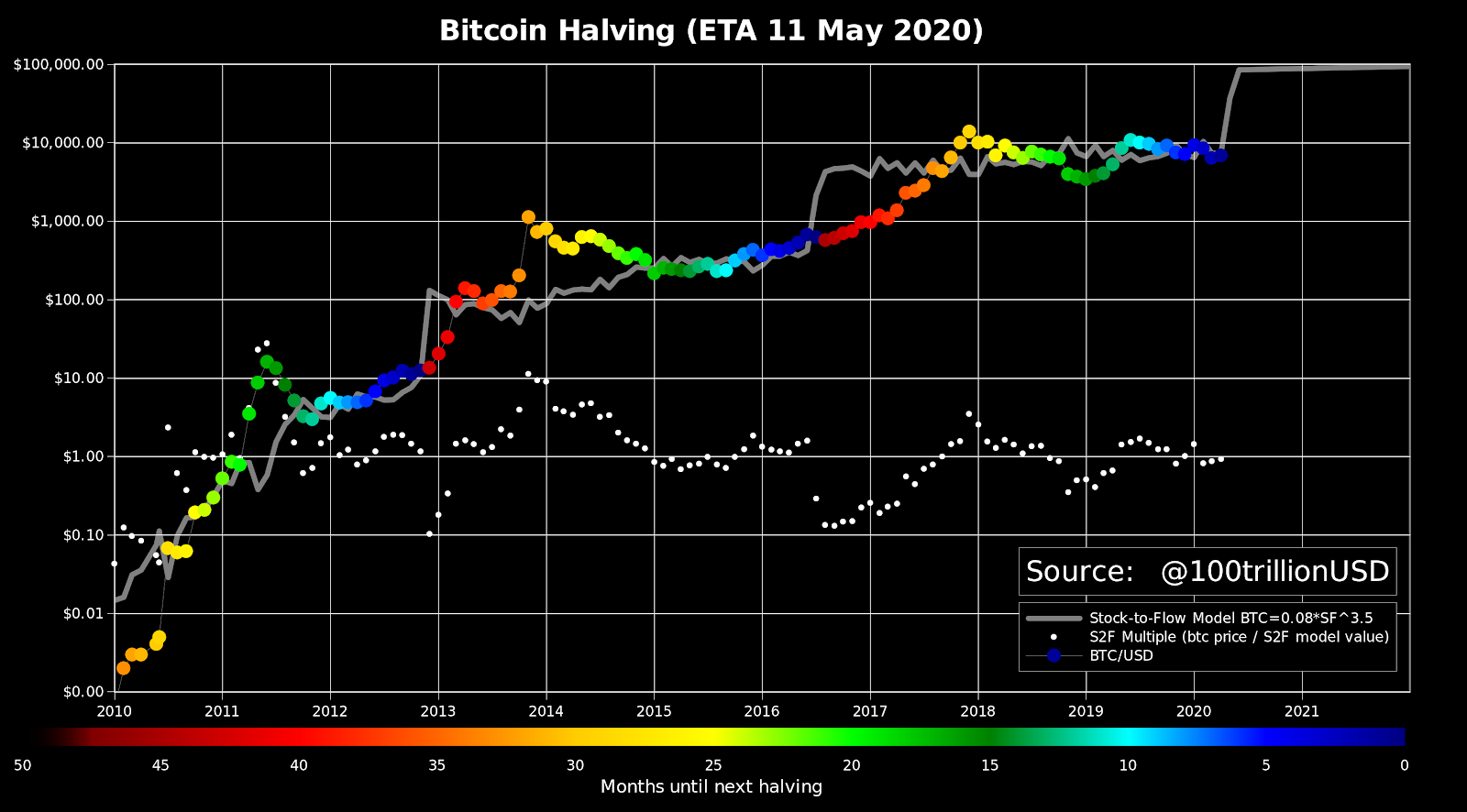 How is the model calculated?

The stock-to-flow model measures the issuance of new bitcoins against the existing supply of bitcoins.

At the moment, Bitcoin’s mining network is producing on average 657,000 new coins a year. But following the network’s next halvening—scheduled for May this year—that production will be halved down to 328,500 BTC per annum.

The model predicts a price based on the stock, flow and two demand constants identified by the model’s much-famed quant creator Plan B.

In super simplified terms, the model predicts that “every halving, Bitcoin stock-to-flow doubles and market value increases 10x.” Based on this ever increasing scarcity, the model is projecting that the fair value of Bitcoin will rise to around $30,000 by the end of 2020.

How do I enable Stock-to-Flow in Cryptowatch?

The trend analysis indicator can be used on any BTC/USD market, and enabled by selecting the new tool from the “Analysis” dropdown.

Once selected, the overlay can be customized based on three inputs:

The overlay can then be set to have an either filled or empty appearance on the chart. The color of the fill is also customizable in the Style tab.

What future Bitcoin prices is the model projecting?

According to Bitcoin’s stock-to-flow model—using an assumed 5% lost coins—Bitcoin should reclaim a $10,000 valuation by mid-July 2020, with price then ascending back to all-time-highs of $20,000 by November of this year.

The post-halvening target for S2F is $55,000—predicted to happen before Bitcoin’s 2024 halving.

Following the 2020 Bitcoin halvening, Plan B’s model is projecting that Bitcoin will carry on its multi-decade parabolic ascent and hit $1 million following the 2024 halving and a colossal $10 million after the network drops its block rewards from 450 to 225 BTC a day in the summer of 2028. 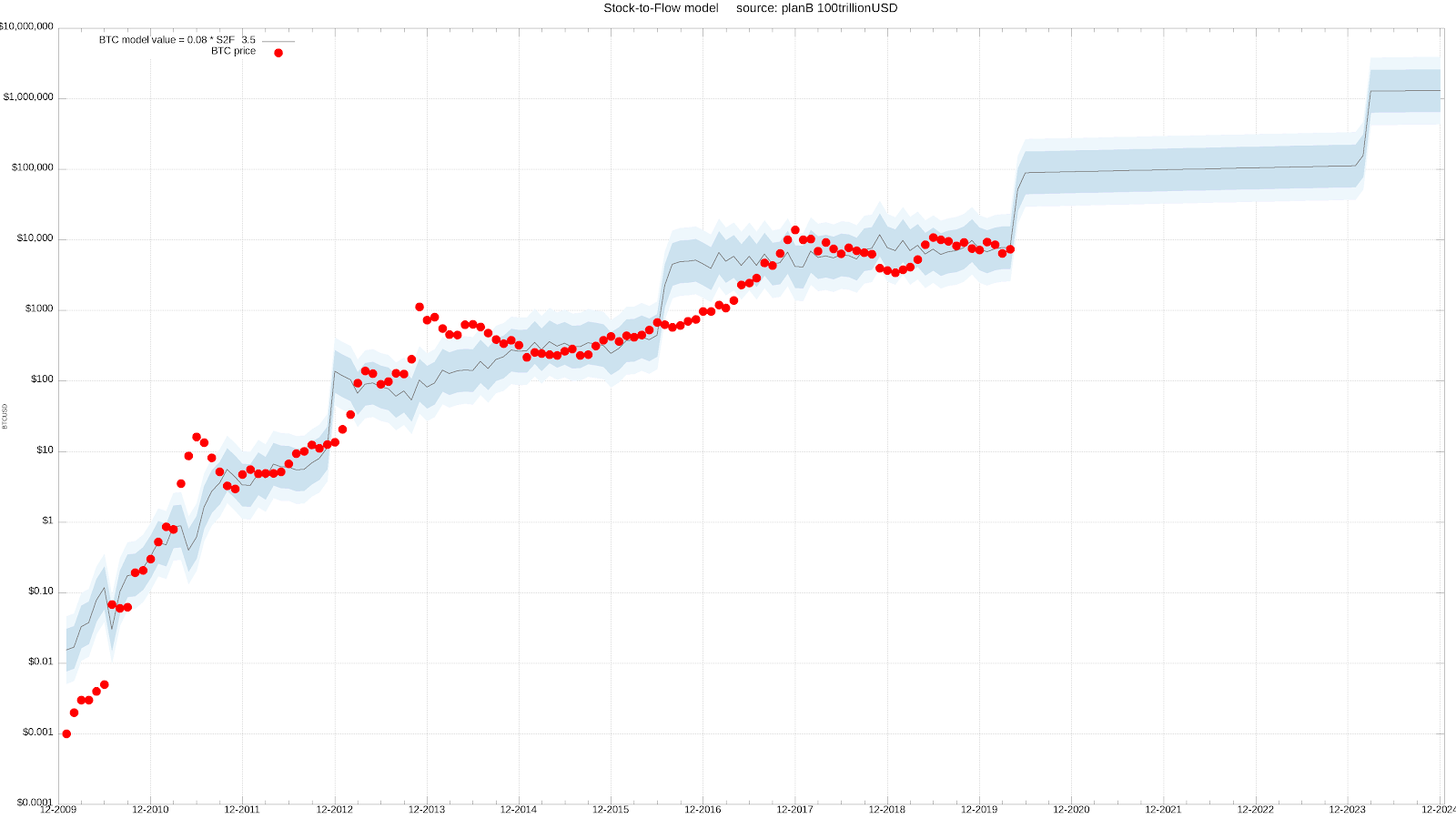 Will it happen?—only time will tell. However, in the current climate of bailouts and infinite quantitative easing (QE), even if just a fraction of all that new money printing ends up settling into Bitcoin—that trillion dollar asset valuation may happen even sooner that Plan B’s model predicts.

No part of this piece is financial or investment advice.  Full disclaimer here.